Last year was the first year I had grown more than a few runner beans and couple of tomato plants. To say it didn’t quite go as I had planned is one way of putting it – another would be ‘complete disaster’. Read on and I’ll explain why.

Last year we decided to dedicate a good portion of the garden to growing our own organic food. We allocated an area to the southern side of the garden below the gigantic christmas tree. Although it was sloped, the only flat area of the garden  – which is also sunnier – had already been set aside for the kids to play on. 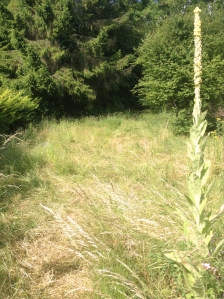 We started out by marking the beds with string and then we (I say we, but it was mostly my partner) dug two vegetable patches but it wasn’t easy. The ground was solid, dry and full of stones. Then there were the roots belonging to that giant tree. Lots of little roots. Eventually we got through them enough to get some plants in the ground, just.

I had started off a lot of veg seedlings in a mini greenhouse on the patio. I had carrots, swede, beans, lettuce, courgettes and more. The greenhouse was full because as usual I had sown too much. I really need to have more faith in the seeds to germinate – partly why at one point this year I had 70 tomato plants! I planted everything out and so it began. We were growing our own food and it was really exciting.

we also built a little fence! 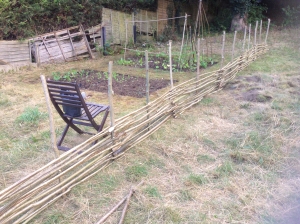 That was until the slugs came! We weren’t prepared for that many slugs and reluctantly we resorted to (wildlife-friendly) pellets as the attack was so ferocious but we really wanted to eat our food. It worked for a while and our vegetables were beginning to grow. 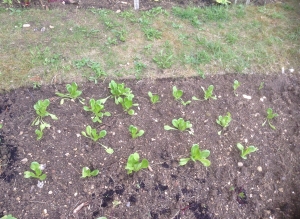 Lettuces above and beans and squash below

Then we ran out of pellets and no matter where I looked I couldn’t find any locally (we didn’t have a car at the time so our options were limited). Resorting to ordering some online, we anxiously waited for them to arrive, picking slugs by hand in the meantime. In the two days it took for the postman to drop them off, all of the vegetables above were eaten. Only one chard plant was left and I was devastated. So for 2014, the only produce we managed to harvest were the tomatoes and chillies growing on the patio.

Because of the mollusc onslaught the previous year, we decided to take a few more steps to protect our crops. After spending a few months during winter reading about it we planned our counter-attack. Firstly, we decided to grow in raised beds. Wanting to try to keep the cost low we built the beds from old pallets. Pallet wood is good enough for raised beds but won’t last forever. Given we don’t plan on being here forever as we are renting, it was perfect. Other alternatives are old scaffolding boards (I did try freecycle but with no luck!). During this process I collected a lot of pins so feel free to take a look!

The first of two of our beds

To fill the beds we used local compost; 4 x 75l bags of organic compost for £12! This worked out to be the cheapest option, although I was hoping to see a post for topsoil on freecycle which would have reduced the cost dramatically. Each bed took around 5-6 bags.

Once the bed was full of compost, we used nemaslug on them as well as around the garden. Nemaslug is a box of millions of nematode worms which parasitise on slugs and snails keeping the population under control. Slugs will bury underground during the day and it is then that the worms will get to work. It’s not as effective on snails which do not bury underground but it can infect water snails so keep it away from the pond.

I also used beer traps – recycled margarine tubs half filled with cheap beer and a hole cut in the side (make sure the hole is big enough for snail shells). The molluscs are attracted to the beer and will climb in and drink themselves into an intoxicated death. I had a lot of success with the slugs collecting up to 10 per trap a night. So, from being able to collect 125 slugs in one night, we now find around 10 so much better, and guess what? Our vegetables are growing like mad this year (but more on this later).