Yesterday I spent the day doing one of the things that makes me happiest; wandering around looking at and recording plants. This time I was at the Easton and Otley College open day at the Easton Campus, just outside of Norwich. The college boasts a 245 acre farm and within this farmland there is a real gem (which even some of the college tutors haven’t visited) – the Water Meadows, situated along the river Yare. This is where I was, alongside other naturalists, ex-students and tutors Jerry, Anna and Nick.

Arriving at the Water Meadows, Nick gave some of us a tour around the site so we were aware of the boundaries and where we could wander and record. We headed towards the river and then west towards a fallen (non-native) Poplar tree. On the way we looked under the reptile refuge and saw three wonderful grass snakes. Just a little further on, the meadow was abundant with southern marsh orchid Dactylorhiza praetermissa including one monster specimen! There were also a few early marsh orchids Dactylorhiza incarnata too but these were almost over, but I have never seen such a density. 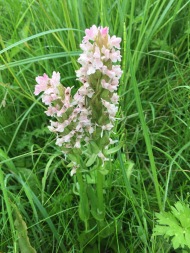 The Water Meadows run adjacent to the river and seem to be largely comprised of four areas, separated by ditches of open water. Some patches were clearly more diverse than others. The meadows are used for grazing highland cattle by the college and some areas have been enhanced with nitrates for the grazing, although this was a while ago now and the flora does seem to be recovering well. 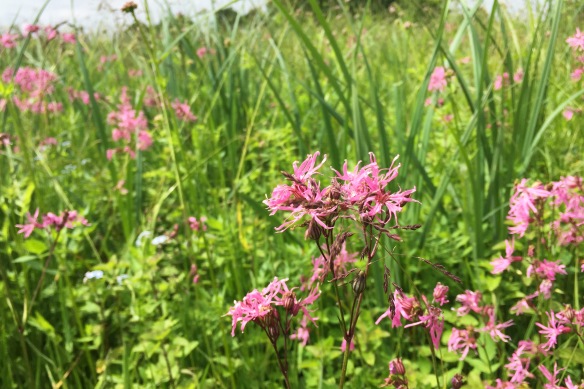 The next four hours were spent surveying the plants within the meadows. In total I recorded 79 flowering plant species and I am confident this is nowhere near a complete list, with many more species yet to be found. What I did notice is that for an area which has been largely neglected, and at times, mistreated with nitrate enhancement, the diversity of plants is certainly comparable to any other nature reserve. In fact, the list reminded me of a similar survey carried out on an FSC training course in Slapton Ley – a National Nature Reserve on the South Coast. Notable plant species included masses of common valerian Valeriana officinalis  and meadow rue Thalictrum flavum and of course the plant which probably has the best scientific name ever – brooklime Veronica becabunga. Say it, go on – ‘bec-a-bun-ga’. Beautiful! 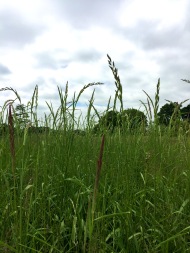 I tried to record other non-plant species that I could as I went around, which included four butterfly species: small white, meadow brown, red admiral and a skipper which skipped away before we could ID it. There were also common carder bees Bombus pascorum and white tailed bumble bees Bombus lucorum, red-headed cardinal beetles Pyrochroa serraticornis and garden chafers Phyllopertha horticola, a rove beetle, likely Bolitobius sp. and numerous hoverflies which flew before I could photograph them. There were also numerous odonata including a few Norfolk Hawkers Aeshna isoceles and masses of banded demoiselles Calopteryx splendens by the river. These are just the invertebrates which I spotted and I am far from being an expert. I am sure the real experts managed to record many more. 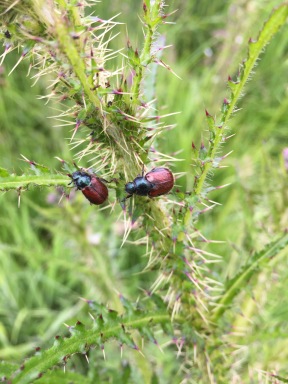 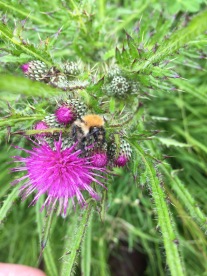 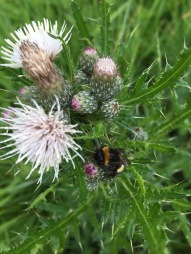 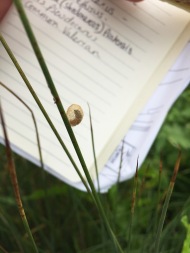 One of the downsides of studying ecology based subjects is that the academic year runs from Sept- June with the latter months usually reserved for exams or putting together final projects. However, the key time of the year to learn about plants is during the flowering season – which for an area like the water meadows, the best months will be June- August. (Because of this, I have never seen the meadows looking so wonderful having only ever visited in Winter!). 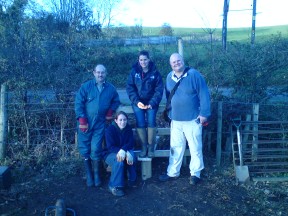 The last time I was in the Water Meadows it was cold! 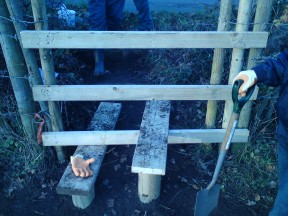 But we made this!

The water meadows could be utilised far not only around the whole year, but also during the summer. The college could offer short courses in natural history or identification, or use the meadows as a location for school children to discover pond life or invertebrates. Even as a location for Forest Schools. There are so many possibilities and just so much potential.

Though the most important is to firstly recognise what a wonderful resource it is, and quite rightly it deserves the upgraded title of Easton College Nature Reserve.